It’s 6pm in Seydisfjördur on the eastern edge of Iceland, and the snowflakes in the air are behaving like a cruel swarm of insects, as an apocalyptic wind whips them against exposed skin. Trudging through knee-deep snow and battling the sheet white blizzard above, it’s impossible to tell where the ground meets the sky. There’s just uniform blankness ahead, like a sterile photographer’s studio stretching on to infinity. It would feel like being in purgatory, if the razor sharp weather weren’t such a biting reality check. 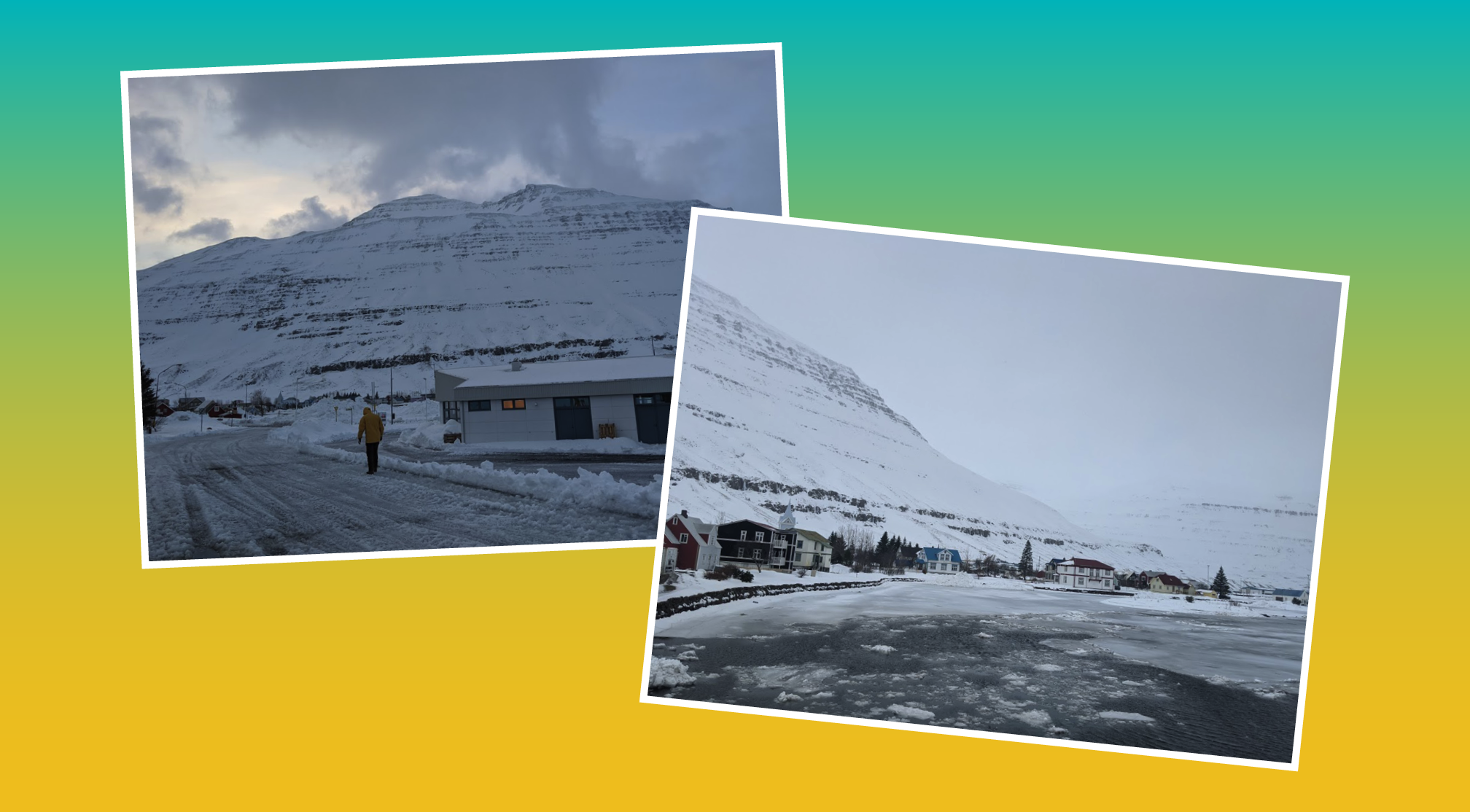 10 minutes later inside a modest wooden house, a dazzling blend of hot pink and exotic yellow lighting fills our vision, and an uplifting selection of old skool disco anthems pumps out of nearby speakers. Coats are hanging up in the corner of the room and the only icy and white thing on the minds of the crowd gathered inside is the delicious piña coladas being drained from cocktail glasses. No, we haven’t figured out teleportation and jollied off to Hawaii. This is Malibu’s Summer Feels Tour, a three-stop party series aimed at spreading the intangible elation that summer brings to the places that need it the most.

Winter is a slog. In its clutches, our wellbeing tends to suffer under the weight of pitch-black afternoons, bone-chilling temperatures and Seasonal Affective Disorder. This year, Malibu decided it doesn’t have to be that way, taking it upon themselves to brighten up the season with the Summer Feels Tour. The run of events kicked off in rainwashed Glasgow, headed north to the sun-deprived brink of Iceland, before finishing up in the icebox city of Winnipeg in Canada. Taking summer-themed parties to some of the harshest winter locations on the planet is an ambitious undertaking. Inevitably, it’s not all plain-sailing. 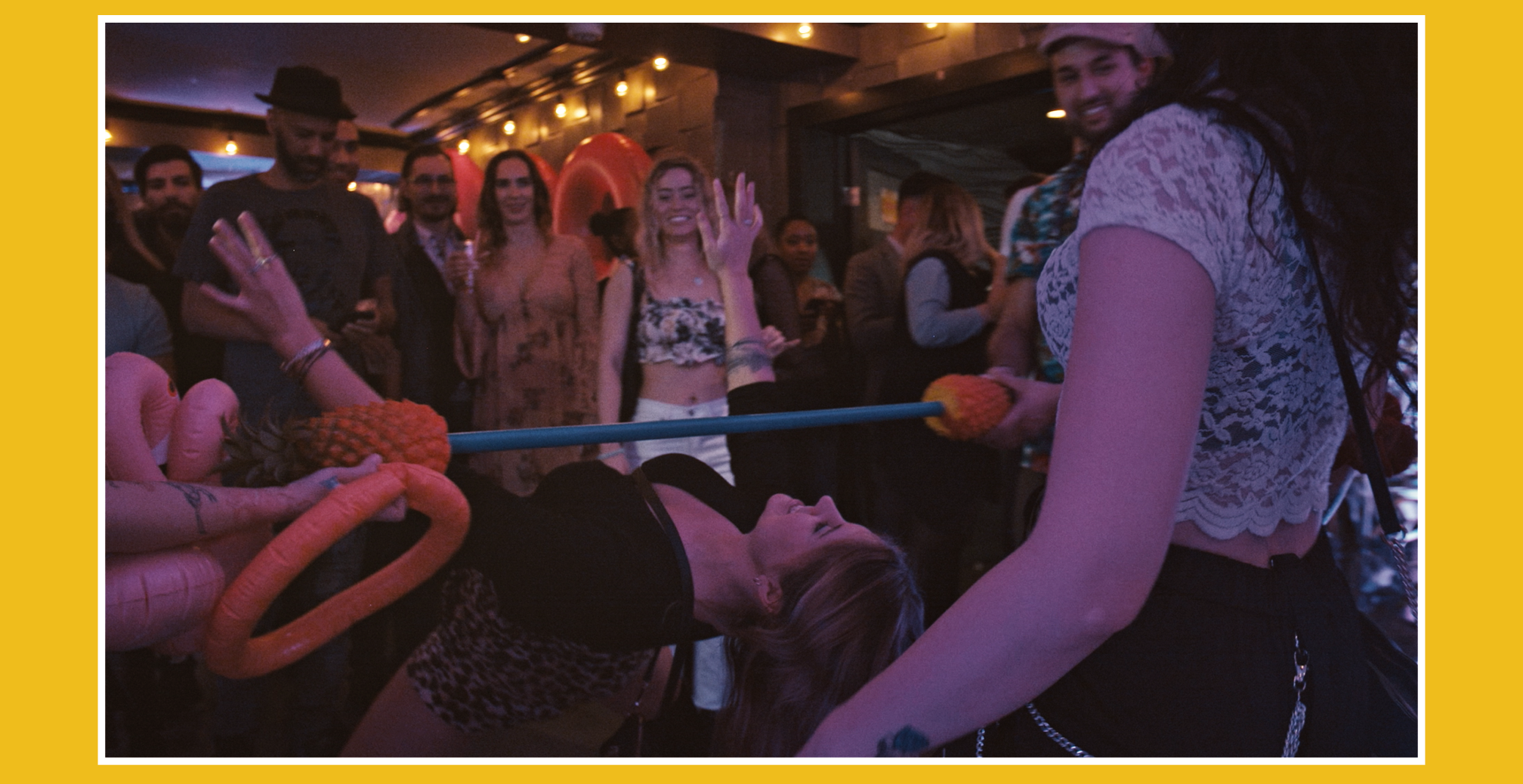 The first snow of the year is falling over London as we make our way to Gatwick to join the Icelandic leg of the tour. It’s an ominous sign this early on in the trip, and soon bad luck starts to pile up. That soul-crushing “DELAYED” message is flashing next to our flight number as we arrive at the airport, and by time we touch down in Reykjavik three hours behind schedule, there’s no hope of making the connecting flight to Seydisfjördur. Reykjavik’s skies are dark and gloomy, at the help desk another stranded traveller is on the phone to a distant boss pleading for some leeway as the storm blocks them from travelling home in time for a shift. After finding a bed for the night and setting an alarm for 5am to catch the first flight out in the morning, it’s fair to say the summer feels aren’t currently hitting. But after we arrive at our destination and the party rolls around that night, our mood is quickly transformed.

Seydisfjördur is prime for an injection of summer energy. The remote village of around 650 people is surrounded by mountains, which block out direct sunlight for four months each year. The natural light it does receive comes through reflection of the copious levels of snowfall, bathing the outpost in this mystical blue hue. There’s no doubting its beauty, but variety is the spice of life in the long winter. And as tonight’s party proves, the locals relish the opportunity to rediscover their summer selves.

Winter tries its best to stop the party from popping. The Weaver Brothers, the headline DJs flown over from Glasgow for the occasion, are forced to turn back home right after landing at the airport when icy conditions force the only road to the village into closure. The scale of the blizzard outside and its potential to put people off coming out, draws a few nervous glances from the organisers during preparations. But somehow, everything clicks. It just so happens that Sigga Boston, famous for running the legendary Sirkus nightclub in Reykjavik until its closure in 2007, now lives in Seydisfjördur, and she’s drafted in as a capable DJ replacement. Then bang on 7pm, the crowds start arriving. 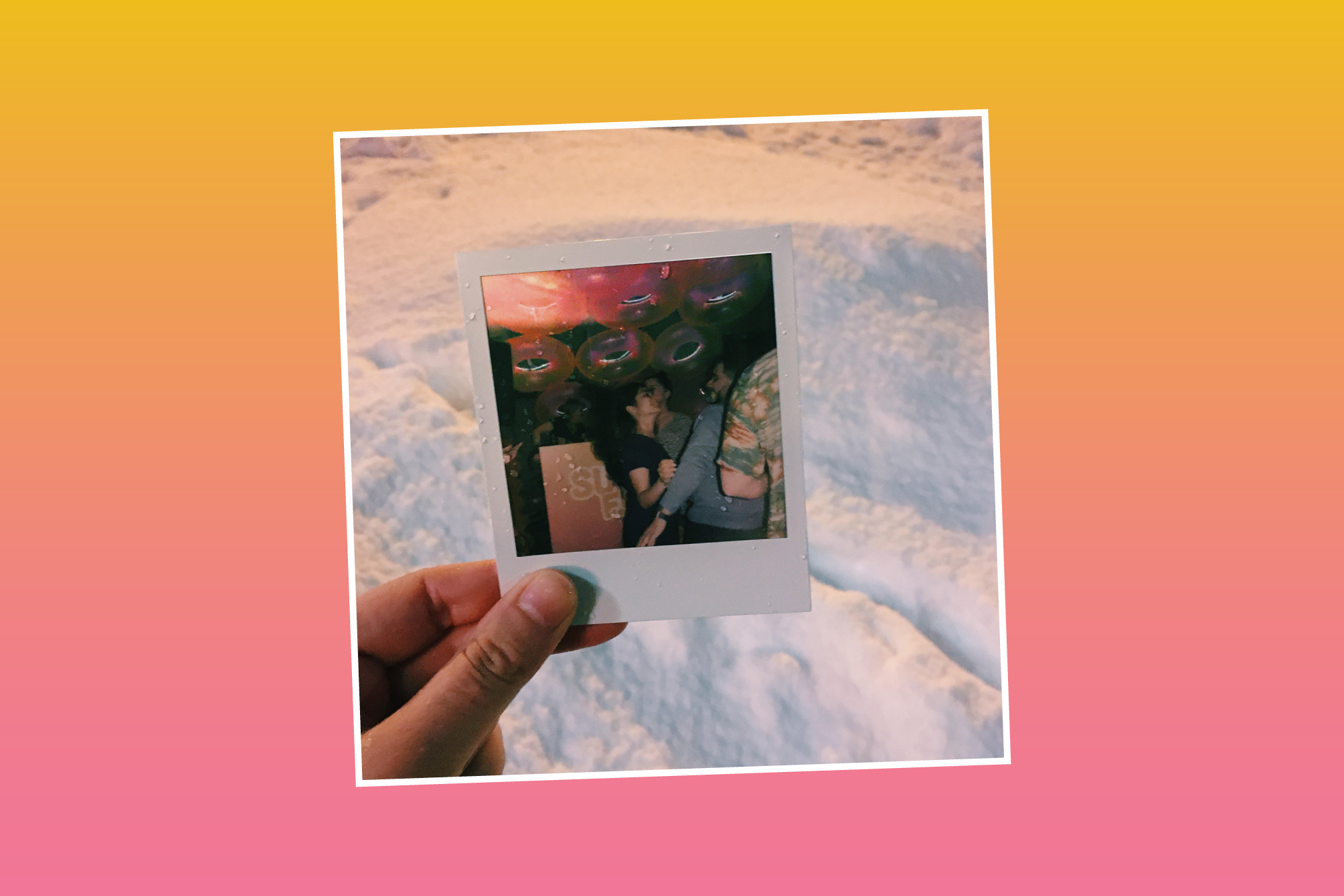 Once the party is underway, the entrance to the Hotel Aldan building is like a threshold between two worlds. Outside, people pull up in monster-wheeled snow trucks and dig out a hefty blowtorch in order to light cigarettes in the high winds. Inside, a calming swimming pool projection covers the wall behind the stocked bar, as jovial mixologists serve up a variety of tasty Malibu based cocktails. The scent of tropical fruit hangs sweetly in the air, and the dancefloor steadily fills out as people start to loosen up. 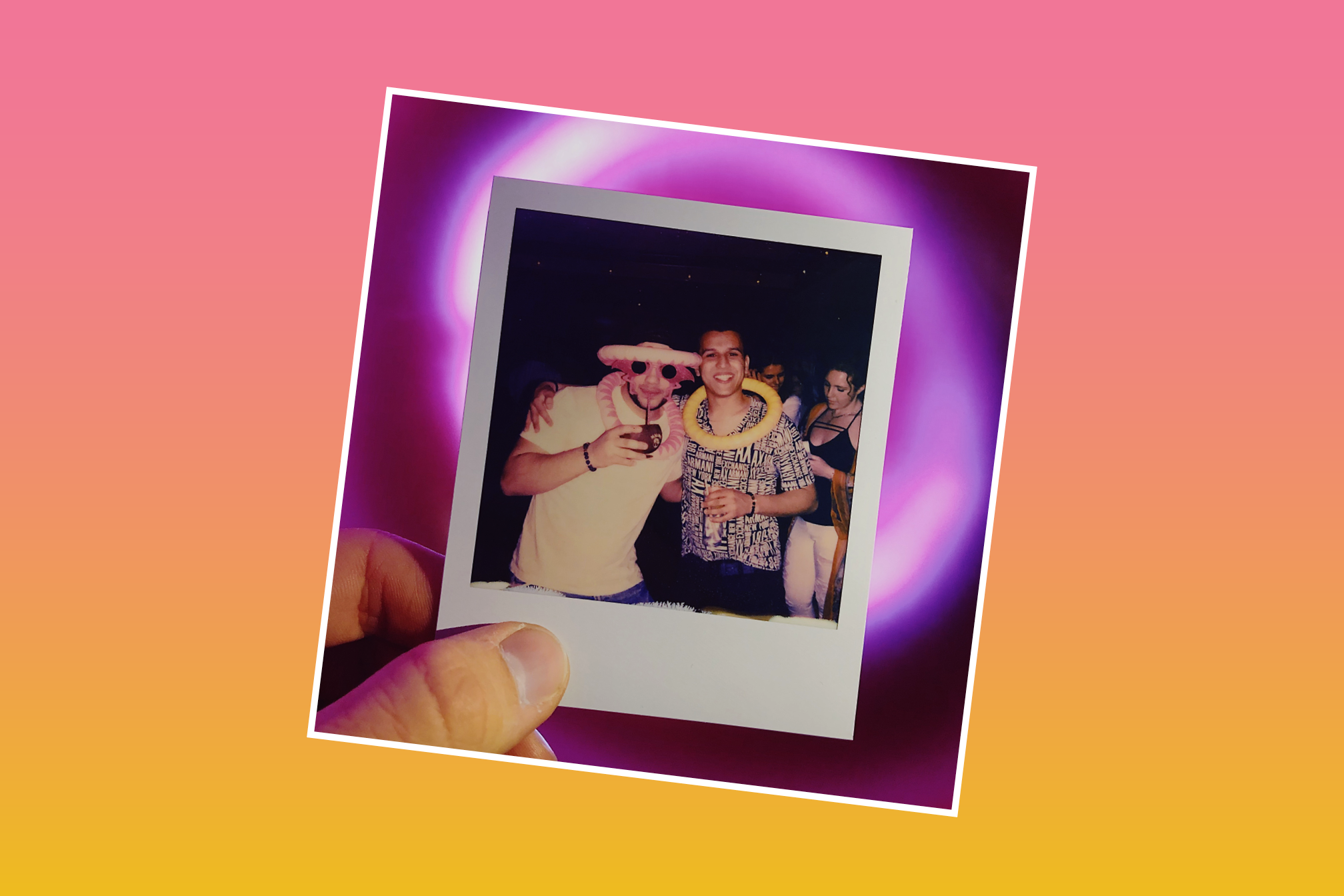 Another unexpected idiosyncrasy to Seydisfjördur is its home to the LungA School, an independent art college that attracts innovative minds from all over Iceland and beyond. Ultra stylish art students is not the party clientele we expected in this isolated community. They come in numbers, alongside local residents and a handful of stranded tourists. The soundtrack is upbeat and euphoric, with selections including Eurodance smasher ‘Rhythm Is A Dancer’ and The Knife’s leftfield synthpop classic ‘Heartbeats’. At first there’s some primary school disco separation between the groups, but gradually the social barriers dissolve, as everyone gets swept up in the irresistible summer wave. Games of limbo break out on the dancefloor, inflatables bounce around the room and massive cheers erupt when people catch rubber rings with their necks while dancing. At the bar a trio of guests play a chorus of makeshift percussion by hitting neon cocktail stirrers against their glasses. It’s a vibe. 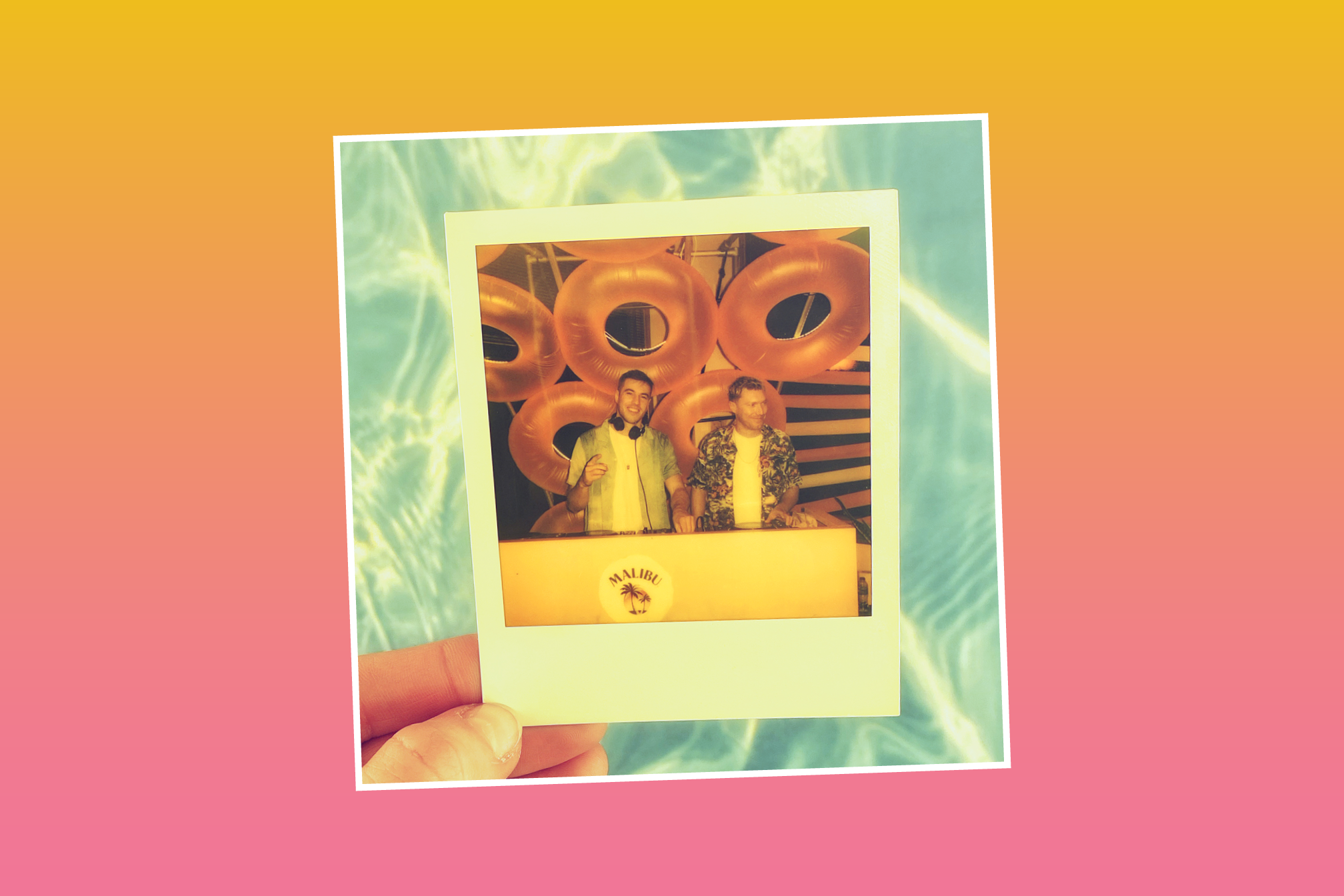 The casual, go-with-the-flow energy that summer often brings and that is also flowing through the party is epitomised by Saniya and Varun, an Indian-American couple who were due to be out exploring the Icelandic wilds today but instead found themselves trapped in Seydisfjördur. “We weren’t expecting to be partying tonight, but we got stuck here because of the weather,” Saniya tells me. “But,” she adds with a happy shrug, “it’s great!”, before wandering off grinning with a pink flamingo balanced on her head. Winter may have trapped them in Seydisfjördur, but Malibu’s Summer Feels party made them feel free.