While Asia has been a relatively late bloomer in the global dance music industry with many of its individual music cultures still in the awkward stage of transition between EDM and trying to discover a distinguishable musical identity, Singapore’s music scene was one of the first to adopt a progressive take on dance music and so it makes sense that it would also be the first to establish a prolific record label.

Midnight Shift is a house and techno label based out of Singapore that’s gained some serious notoriety for releasing music by artists like Recondite, Deetron and Secret Cinema. At the same time the label does a fine job representing emerging local talents as well as giving international artists a home in one of Asia’s biggest music markets. Though impossible to pigeonhole them to any one style and sound, the label is very much in line with the global uprising of techno and its influence is apparent in Singapore’s nightlife.

With upcoming releases from Mr. G and KiNK, we thought it was time to put Asia’s most celebrated label under our spotlight and we chatted with Midnight Shift’s founders Debbie Chia and Kavan Spruyt about the label’s past, present and future. What we also uncovered is that there are in fact more would-be label heads in Asia than we thought, and that Midnight Shift’s fruition lies in their East meets West mindset, savvy marketing and unique ideology (which they refer to as shiftology). The label managers have also selected the label’s five key releases that you need to know about and those are below the interview. 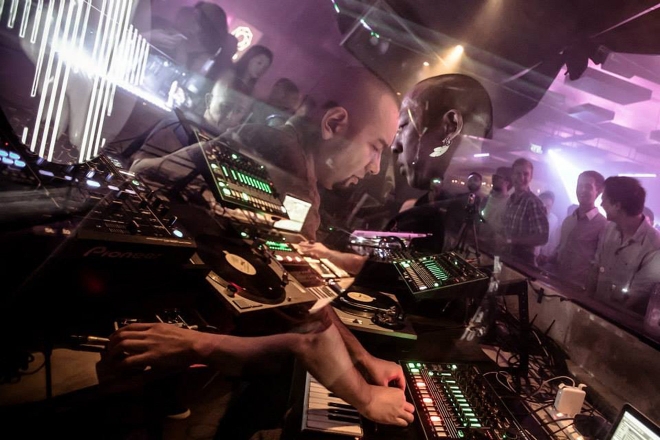 What inspired you to start the Midnight Shift label?

KS: The label spawned from a series of parties that we started throwing in 2008, during a time when EDM was taking out the house and techno scene here in Singapore. We wanted to keep the dancefloor dancing to the underground and so Midnight Shift was born. The label was to be a representation of the music of the parties, but since it has grown with our tastes and it represents what we wish to present about this island of ours.

What’s the musical ethos under which Midnight Shift operates?

KS: We are open to all forms of house and techno (even electronica) as long as it sounds good. Normally we approach the artists and if we are on the same page and can align ourselves together on the record, something gets put out. We have separated our releases into two formats now: The White Series which represents a more melodic and housier side, it signifies what Singapore is, well mixed and full of variations. Next the ‘X’ series, a techno series, it is basically what we hope the music lovers here would grow to love.

What’s been your proudest moment with the label?

KS: We are really proud of everyone and thankful that we have become a family. It’s a pleasure and VERY rewarding to see the artists you have on your label growing from strength to strength. We have always stuck by the motto, “be there when it matters”. I guess that’s why quite a lot of people ask “Why do we have <insert artist name here>?” I guess it’s just because we were digging really hard for good music and trying to expose them to a listening audience here. I have to give a special shout out to Charlton, Colin Mcbean, Eddie Niguel, Marco Freivogel, Nick Dunton, Sebastian Kramer, Strahil, Stuart Li and Xhin for their patience and helping me with this process.

You have some big names tied to the label, how did you hook up with guys like Recondite?

KS: We were fortunate enough to tune into Recondite’s work early on before he blew up. He was open when we approached him and we connected and furthermore shared good times during his gig in Singapore and when we visited in Berlin.

What’s the balance between local and international artists on the label?

KS: We don’t really have a rule or a set quota on this. As long as it sounds good we will get it on the label, if it is Asian then it is a nice bonus. We would like to take this chance to also do a call out for any Asian artists to send their demo to us as well. We listen to every single demo, even if its awful commercial stuff that we didn’t know about before we click on the play button… lol.

How do you go about discovering or connecting with Asian talents?

There are so few record labels in Asia, why do you think that is?

DC: Well firstly if you are talking about vinyl, the manufacturing plants are not located here and in terms of expertise even mastering for vinyl is not so easily available. So labels have to search farther, which takes more resources, to get an imprint going. Another reason is that distribution in Asia ex-Japan is difficult because the markets are so varied and some countries don’t even have vinyl stores, so any market for the music that we’re doing (at least for now) would be mainly an international market focusing on Europe, the US and Japan.

For digital, I guess that’s a different story but it’s because the masses in Asia are still more pop oriented (dance music is an import for us) and at least if I can speak for Singapore the numbers who listen to underground electronic music are less for a culture to grow and sustain itself. I actually think there are quite a few labels in Asia… besides Japan that has heaps, in Singapore alone you have DTW, Phyla, Syndicate, kitchen, Rawjak, Eclesia, Dustpan Recordings, SoulMatters in the house/techno/electronic spectrum and more on the indie side, in Beijing I just heard of Ran Music and in South Korea you can look at Less n Less.

What do you think can/should be done to change this?

DC:  I think that if the artists are first here, then the labels will naturally come. So, it would be about growing the talent base and creating pockets of authentic subcultures that can spread seismically, or at least that’s what I really love about music as a community.

What labels inspire you?

KS: Too many to mention but you should take note of this local label called Darker than Wax, the boys are doing so well with their releases and have created a niche among the global scene. They are the real heroes in my opinion.

KS: We’ve got quite a line up of releases this year. We have releases from Mr. G, Andreas Gehm (Elect Pt. 1), KiNK and Giorgio Luceri. A Chicago original will also be on the label. And we are also hopefully looking at an album, among others to be rolled out this year

"Our very first release of course has to be here. Featuring Singapore’s Eddie Niguel and Toronto’s Basic Soul Unit. Eddie’s Absolute ended up being a hit especially in the festival circuit, played by Disclosure, Josh Wink, Basement Jaxx and more, and we couldn’t have asked for a better start for the label."

“Remixes of the first EP, courtesy of Deetron and Secret Cinema, whom we really need not say any more words about. A really special package plus artwork from Winnie Wu.”

“Our label started pairing different producers together, and we thought Recondite, who was then on the upswing and Julien H Mulder, an under-the-radar producer from Stockholm, made a neat and solid pairing being two different sides of the same coin.”

Tapirus - Trying To Make Something Of Life

“Charlton is a huge talent and we convinced him to take on a new and different moniker for the Midnight Shift project, which he did. The result is gorgeous as there’s real storytelling here, and also features a remix by Basic Soul Unit.”

“A forthcoming release that is actually taking much longer than expected to see the light of day for various reasons. Sisyphus’s spirit is indeed alive in this one, but we know all the effort will be worth it in the end.”

Demos can be sent to [email protected]