When RayRay walked out of a studio after a session with Skrillex in Seoul, it inspired her life as an artist. When she delivered a TEDx talk about overcoming obstacles as a DJ, it honored her life as an artist. When she was the first ever female in the world to compete in the Red Bull Thre3style championship, it changed her life as an artist. Lately the Taiwanese wunderkind has been pretty damn busy reaping the rewards of her tireless work ethic that involves relentlessly writing new music, a now hectic international tour schedule and supplying the Taiwanese music scene with a steady stream of nights via residencies at clubs like Luxy, OMNI and the W Hotel. Her latest triumph is having been handpicked for the Supermodified roster in Asia.

In a country where the cultural norm pressures youths to go to school 12+ hours a day, study math, get a blue-collar job and finally just survive, Taiwan’s music culture has been a bit slow developing when compared to its neighbors. But this didn’t even faze RayRay – she was DJing hip-hop parties when she was just 15. She smashed all expectations, broke down borders, defied stereotypes and said fuck genres. Her output sounds likes unapologetic bass music that she keeps weird under her alien inspired alter ego aptly titled WiFi Grapes.

Now with countless gigs around the world at events like Glastonbury, SXSW, Ultra Music Festival and ADE, RayRay has solidified her stature as Taiwan’s next generation of talent. She represents a new wave of artistry coming out of the island nation, one that is driven by creativity and originality. One look at her socials and you’ll see a globetrotting artist who thrives on networking and collaborations as a way to immerse herself and her sound into the world. Her incredible journey is the embodiment of everything that is possible for artists in Asia and she remains a magnetic figure in Taiwan, leading the future generation of artists to break out into the world while always champing on the bit for more. 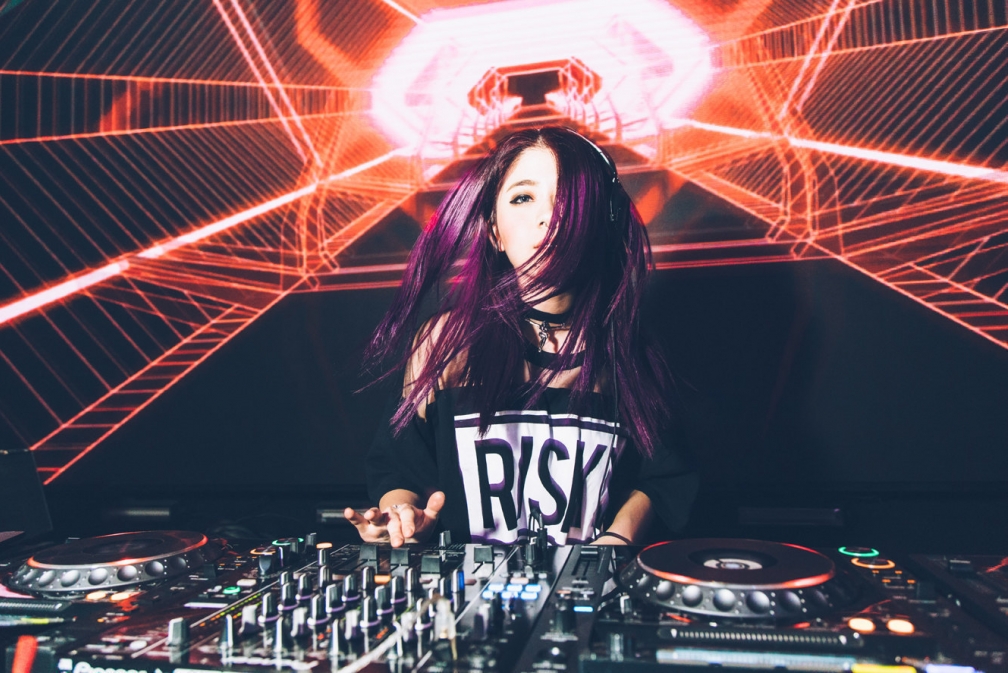 What’s the best thing about living in Taiwan?

I enjoy the conveniences and the transportations here. It’s really easy to get cabs and food 24 hours a day. People from Taiwan are also very friendly. We love to help each other.

What’s the worst thing about living in Taiwan?

The weather. I can’t survive the summer in Taiwan – too humid.

Take us on a night out in Taiwan – starting from dinner, drinks, party to afterparty?

I would start at the night markets for some cheap and delicious snacks. After that check out the DongChu and Xinyi districts to go shopping, then find a good bar and get some drinks. I work every weekend at my resident club OMNI so definitely party there. It’s a great place to enjoy the music because VOID speakers.

It’s difficult to describe your style of DJing because it’s so diverse but how would you sum it up?

I’m into different kind of music. I really like percussions and subs so most of the productions I’ve made are unique because of their weird percussions and heavy subs. However, I’ve been DJing for 8 years so I started with hip-hop. I was so in love with the 90s and jazzy hip-hop. As I’m sure you know, hip-hop is about digging so I was always looking for samples of the songs. Because of that, I started to know about funk & soul music. It was only after I got my first gig in a club that I discovered house music. It was really interesting to me because I used to listen to a lot of groovy music but house music is more about tempos and all kinds of build-ups and layers. I’m also a big fan of ghetto house. I like the way the bass moves and the chops of hip-hop vocals. Recently, trap and drumstep have been my favorite music style. I’ve even been making a lot of trap music production and I call it alien music. Overall, I love to combine all kind of elements and music styles in my set. It’s just like telling people the stories through music.

Now that you’ve got to experience music cultures all around the world and festivals like Glastonbury, how different is the party vibe different abroad from Taiwan?

Most of the time I play at clubs in Taiwan. Taiwan’s music scene is more about EDM right now but people still can accept trap/twerk/hip-hop and these kinds of music so I think Taiwan’s music scene is getting better. I really like Toronto’s vibe. I still remember last time I was there for an event, the crowds were so hyped and energetic no matter what kind of music the DJs played. My favorite music festival so far has been SXSW in Austin. I met a lot of cool producers last year when I was there and I also had a great time to enjoy my sets and different parties. However it doesn’t matter if it’s Taiwan or another country, we are all in love with the music and gather together to enjoy the party so it’s all the same in the end.