This Earth Day, we’ve teamed up with the Bye Bye Plastic Foundation and ABRACADABRA to turn the tables on streaming as you know it. Instead of broadcasting from one of the most beautiful locations on the planet, we’ll be playing music in front of a location that needs our help.

This rainy season was a long one in Bali, and with every big rain came a lot of plastic. In January, The Guardian published a harrowing article highlighting the issue after 90 tonnes of rubbish were collected over the course of two days from beaches in popular tourist areas like Kuta, Legian and Seminyak. That’s the equivalent of 13 adult male elephants! The problem isn't a new one and happens annually, which is worsened by monsoon seasons and coupled with poor waste management and a global marine pollution crisis. 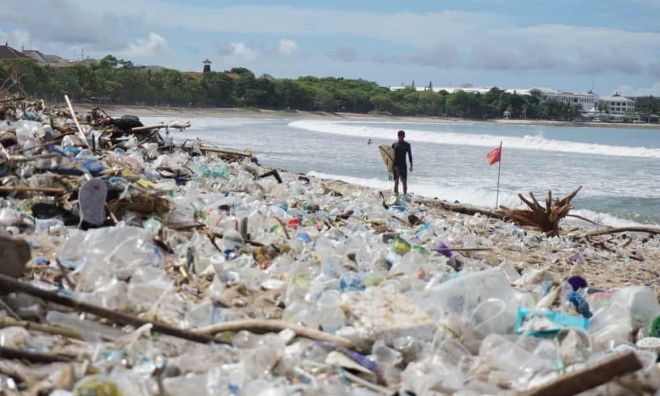 Sungai Watch are a community clean up operation on a mission to protect Bali’s waterways. The project is founded by Make A Change World and Gary Bencheghib, and in the last eight months alone, Sungai Watch collected 300,000 pounds of plastic in Bali (!!!). They came up with a solution to install floating barriers in rivers around Bali to catch the rubbish in the rivers before it spills out into the ocean. This year they built up a team of people who lost their jobs due to COVID and head out daily to collect what they catch. Then it gets sorted, processed and then shredded, where it will eventually be turned into new products, like a first-ever barrier made entirely from recycled plastic bags. Each barrier costs 3 million IDR (just over $200) and that covers the cost of set-up, full collection every day as well as sorting (you or your business can sponsor one too and have your logo emblazoned on the barrier). Sungai Watch are working to install 100 of these barriers and are halfway to their goal — and we’re going to help them by fundraising for the cause via one of the most special projects we've ever put together.

An entire community of people who share a similar planet first vision came together to produce a stream while Sungai Watch led a river cleanup with the aim of raising awareness surrounding the issue of plastics in Bali. DJs Lauren Lane and the Rainforest Pavilion volunteered their time, voice and music to the cause, and Potato Head Beach Club lent equipment and sound set up as well as an incredible DJ booth made of upcycled Tetra Pak. Slab Interiors, who make plant pots from a material called Eco-Crete which contain anywhere between 10 to 100 plastic bottles collected from beaches around Bali, donated a couple of planters as giveaways. And finally, BVR Bali Black Wall Movement who are on a mission to preserve culture through art in Bali, painted a mural next to the location in honour of Sungai Watch.

To donate towards the barriers and watch the stream, tune into the stream this Sunday, April 25 at 12am LA / 8am UK / 3pm Bali during ABRACADABRA Earth Day Festival on Twitch where you can scan the QR code on the screen to donate to Bye Bye Plastic, a foundation created by BLOND:ISH aimed at ridding the music industry of single-use plastics, with funds raised from this stream going towards the purchase of two barriers for Sungai Watch. Donations from Bali stand to win a large planter from Slab Interiors and donations from around Asia stand to while one of the little guys. If you’re in Bali, stay tuned for news on a watch party and more.

Why do we care?

The music industry is a powerful place where an artist’s voice carries weight and influence via music. What if star power could be used to benefit the ecosystems that we, from time to time, call our dance floors? Our mission is to engage and inspire artists, event organizers and music fans in our community to be a catalyst for change and use the power of music to give back to Planet Earth.

Are you an artist that wants to work with us on our next for-the-planet project? Hit us up!

With special thanks to Harley Lunar for the filming and long hours of editing.